At the March 17, 2020 City Council meeting (when management’s cost estimate was $1.5 million), then-Acting City Manager Tom Modica indicated that in view of COVID-19 developments, city staff might not to spend some of the items as described in the agendizing memo but didn’t specify which ones. He indicated that for some items city staff would return to seek Council approval before spending the sums. “When we put this on we were not expecting COVID-19 at the level where we’re at, so we would ask your permission to hold off on any of these things if we find that really redirect it given the crisis, so we would like staff permission and then we’d come back to you and reappropriate that and get your approval before spending it.”

Social network comments (on NextDoor.com and Facebook were nearly entirely in opposition. Veteran El Dorado Park advocate Ann Cantrell (“Friends of El Dorado Park East”) submitted written testimony in opposition. Ms. Cantrell (in her 80’s) noted that her doctor told her to isolate herself due to the coronavirus so she couldn’t testify personally. She asked that her testimony be read aloud at the Council meeting Neither the Mayor nor any Councilmember acknowledged her written testimony much less read it aloud. Ms. Cantrell wrote in pertinent part:

…Replacing biological organisms with plastic in our environment is aesthetically, ecologically, and morally disturbing in an array of ways

In a March 17 email to Mayor Garcia and the Council, El Dorado Park South Neighborhood advocate Grace Earl credited the Council for eliminating plastic straws from Long Beach and enacting other ordinances showing “how bad plastic is for our environment” then asked pointedly: “[W]hy are you all wanting to install a plastic field in El Dorado Park West as a replacement for the grass field that has been used by Long Beach kids for over 30 years?” Ms. Earl urged the Council to vote “no” on the “1.5 million dollar unsafe, unsustainable, water wasting, manpower intensive maintenance plastic soccer field.”

Taxpayer Maria Arriola was more blunt. In a single sentence email sent to LB’s City Clerk, she wrote: “Please do not vote yes on a soccer bill at this time when we don’t what will come next with corona virus.”

Councilwoman Mungo made the motion to approve the $1.5 mil allocation from Measure A sales tax FY19 “surplus” (funds beyond what was expected and not yet spent) for the artificial turf project; Councilman Richardson seconded Mungo’s motion and the Council voted to approve it.

Parks/Rec staff contends replacing natural grass turf with synthetic turf on soccer fields has several benefits, including providing a playing surface that addresses field safety issues and enhances playability to meet demand” and would mean less “down time” for soccer fields. (Image below prior to project changes referenced above.) 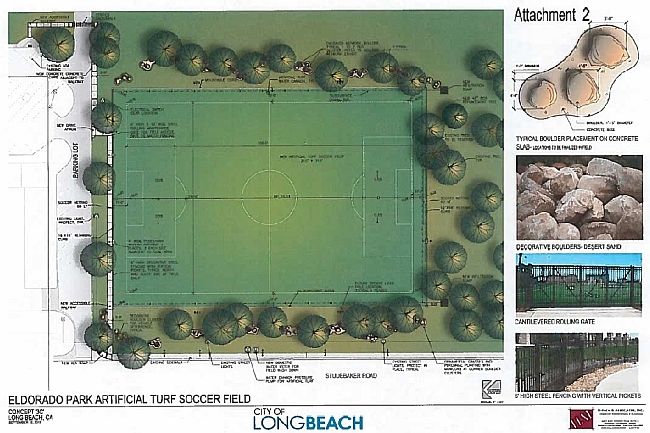 The artificial turf sports field, similar to those installed at the four other LB parks to date and planned for others, will use cork and sand fill, not “crumb rubber” (the latter have drawn public pushback and prompting a 2015 Parks/Recreation Commission majority vote to recommend cork/sand fill.) A 2015 Parks/Rec Commission vote recommended more costly cork/sand fill over staff-recommended acrylic coated crumb rubber.)

Councilmembers signaled at their meeting that they didn’t object to the allocations. At that time, Councilwoman Mungo said she was comfortable with management’s recommendations for allocating $4.3 million in Measure A FY19 “surplus” for a number of items (subject to some amendments from her committee.) Those items included the $1.5 million El Dorado Park artificial turf soccer field.

“Measure A and the promises of Measure A have consistently year after year been fulfilled. The promises that this dais, this board, made were for infrastructure and public safety. And maintaining our parks and libraries are [sic] as important as our streets,” Councilwoman Mungo said on February 18, 2020.

In public testimony at the Feb. 18 Council meeting, ELB taxpayer/veteran park protection advocate Ann Cantrell said she supports a new soccer field at the location but said it should be natural (not artificial) turf. Ms. Cantrell said artificial turf fields and their plastic faux grass get much hotter and have to be cooled by using water (and not reclaimed water.)

In Feb. 18, Mayor Garcia didn’t mention the artificial turf’s installation cost figure (although the agenda item was a budget-related item.) Instead, Garcia shifted discussion to the benefits of soccer fields. He said artificial turf soccer fields are popular and successful across the city, he wholeheartedly supports putting one in El Dorado Park and he commended Councilwoman Mungo for her efforts to do so.

Mayor Garcia asked city staff when construction would begin…to which staff replied that the Council would first have to vote in March 2020 on an agenda item that formally allocates the $1.5 million sum as part of FY20 budget adjustments. Councilman Roberto Uranga added that an artificial turf field in his district is popular. No Councilmembers signaled disagreement with the recommended $1.5 million allocation from Measure A.

In wrapping up the Feb. 18 Council item, Councilwoman Mungo defended her record on El Dorado Park projects and the City’s record on Measure A spending.

Councilwoman Mungo: Measure A and the promises of Measure A have consistently year after year been fulfilled. The promises that this dais, this board, made were for infrastructure and public safety. And maintaining our parks and libraries are [sic] as important as our streets.

Additionally, in relation to the extensive amount of maintenance and repairs needed at El Dorado Park, both West and East, I’ve consistently helped form fiends groups [“friends of” groups]. I’ve consistently requested the groups to maintain a list of their needs, and the items on the lists that are easily identifiable and maintained and communicated to our office have been funded. We’re doing a $2 million duck pond restoration and enhancement. We’ve replaced and funded new tables, there were 40 tables identified throughout the park that were in disrepair. I went to one of the friends group meetings and proposed where we should place them and talked about the different strategies on how we could repair other benches throughout the park, not using Measure A funds but using Council district funds for something that was on their list, and then the $100,000 in filtration pumps that were allocated tonight with this vote that will be helpful and millions of dollars throughout the city but several of them will be for park bathrooms in El Dorado Park done this summer. So that’s about $6 million in investment in just El Dorado Park East and West…

Donations pour in for fire evacuees and their pets; C.O drop-off locations arise

Donations pour in for fire evacuees and their pets; C.O drop-off locations arise

UAB vs. South Alabama line, prediction: QB injury will be the difference

Check Out 32 Photos Of Adorable Pups & Their Celebrity Parents!

The right food for your pet at Treats Unleashed

59 cats and kittens have been rescued from a Sandy Springs condo; the owner was cited | Region

The right food for your pet at Treats Unleashed

59 cats and kittens have been rescued from a Sandy Springs condo; the owner was cited | Region