Activision revealed the multiplayer gameplay for Call of Duty: Black Ops — Cold War today. This is new installment of the franchise that has sold more than 300 million copies across 17 years. And this year’s multiplayer will be as frenetic as ever.

I played Cold War’s multiplayer during a recent online press event hosted by publisher Activision and game studios Treyarch and Raven Software. And Activision also revealed the details in a stream on Twitch. In my preview session, the action was nonstop, and I enjoyed venturing to new places for some fast first-person shooter combat.

Activision did say that Cold War features a unified progression that is shared with Call of Duty: Warzone, adding inventory items that can be used in both titles. Both games will also share post-launch content from a narrative standpoint, interweaving the themes, locations, weapons, and vehicles of Cold War into Warzone. The game will focus on boots-on-the-ground, plausible combat, and grounded combat.

With this game, Treyarch and Raven Software are bringing the themes of the single-player campaign into multiplayer. Players can customize their avatar, or Operator, with a classified dossier. You can fight as members of spy organizations from the Cold War, such as the CIA, MI6, and KGB. When you start a multiplayer battle, narrative elements are woven into the storytelling, such as a speeding car depositing a crew of operatives at a scene as a match starts on a map in South Beach in Miami.

The maps involve locales around the world, from the contested waters of the Black Sea to the desert of Angola and the stone buildings of Moscow. The missions involve small “boots-on-the-ground skirmishes to all-out, multi-team warfare.” The matches will be cross-play and cross-generation, meaning you can play with friends on different platforms, including PS4 players teaming up with PS5 players. With cross-progression, you can switch platforms without losing your progress.

A variety of modes

The multiplayer modes include the new tactical 6-vs.-6 in VIP Escort missions. That means you have to guard one of your players with your life, making sure they make it to one of two extraction points on the map before the enemy kills the VIP. I played some of these missions in my preview. This fits with the Black Ops theme of covert operations.

Mostly, I played 12-on-12 Combined Arms battles, where the object was something like Team Deathmatch (shoot the enemy as much as you can) or Domination (hold three points on the map). You can play Kill Confirmed battles, where you have to run over dog tags after shooting a rival in order to get credit for a kill.

Above: You can call in a tank in Call of Duty: Black Ops — Cold War multiplayer.

One mode we didn’t play: Fireteam. In these 40-player battles, 10 teams of four players each take on each other in big battles on larger maps involving land, sea, and air vehicles. The first Fireteam game type is called Dirty Bomb, and details will come out later. In Fireteam, you can spawn on a player who isn’t in direct combat, such as you do in EA’s rival Battlefield series. The presentation today showed that your job as a squad is to pick up a small nuke, extract the plutonium, set it off, and deposit the plutonium amid a radioactive battlefield. That’s not so plausible, but it does sound like fun.

The maps will include such designs as three lanes, where you have three avenues of attack, and open combat spaces to unique large-scale maps that weave infantry and vehicle combat together. Black Ops: Cold War will also offer a Battle Pass system and deliver a steady stream of free post-launch content, including multiplayer maps and modes. It will also have a schedule of in-game community events.

The weapons comes from the 1980s, including staples such as the Soviet AK-47 assault rifle. You can create your own loadout with the familiar Create-a-Class system, though it has been simplified and made more flexible. You can have up to four Wildcard devices that add customization to your abilities. With Gunsmith, you can create 54 different weapon attachments over eight attach points. You earn these attachments along the way as you play more rounds. You can look up the stats on your weapon any time.

One of the changes made in honor of the Noobs, or new players, is that your Scorestreaks are no longer lost when you die. If you get three kills in a row, then get shot, you don’t lose the ability to rack up Scorestreak points. You can keep earning them as you get kills until you earn a major Scorestreak. The small ones include a remote-controlled explosive mini-car or a spy plane, while the bigger ones are bombing runs or artillery strikes.

The vehicles include snowmobiles, dirt bikes, gunboats, wakerunners, FAV buggies, attack helicopters, and tanks. The perks that you can use to modify your playstyle include Spycraft, Gearhead, Ninja, Ghost, and Engineer. You can sprint through the battlefield without losing your strength and you heal automatically. A mini-map displays non-suppressed gunfire for all players. 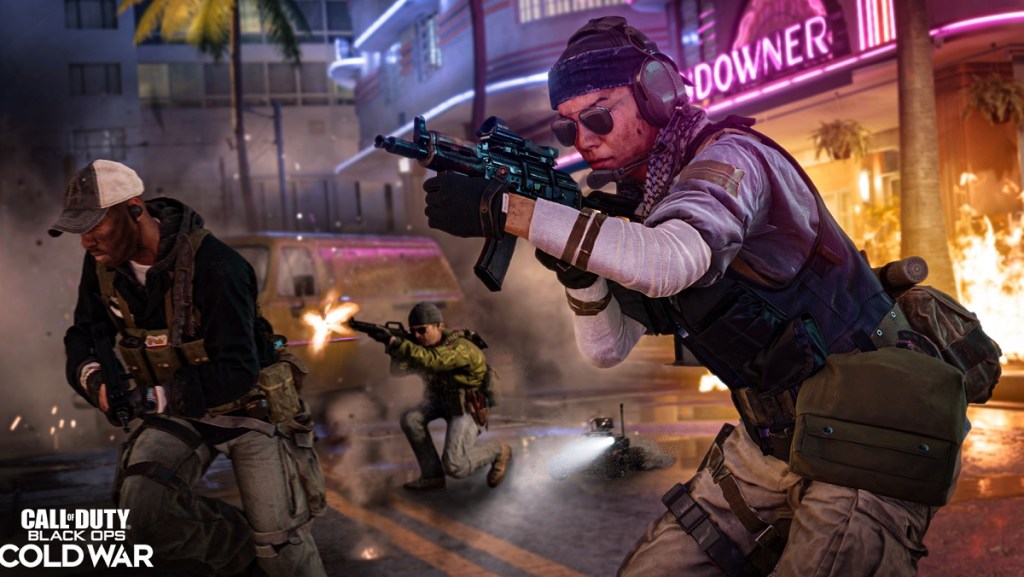 Above: Battle in South Beach in Call of Duty: Black Ops — Cold War.

The game will play on 4K if you have a TV that can display it, and it will accommodate next-gen 3D audio, where you can hear if someone is in front of you, behind you, above you, or below you. Weapon sounds are different based on their origin point, directional footsteps help determine the proximity and position of your enemies, and real-world occlusion provides more detail about the direction and distance of the events around you. The sound of a “bullet crack” nearby will tell you how much danger you are in. In my demo, I didn’t get to hear this.

I played a round of Domination on the ship map, dubbed Armada, which is set aboard Russian vessels in the North Atlantic. The map has three big ships that are connected to each other via ziplines. You can ride on the ziplines back-and-forth and shoot enemies that you can take by surprise. I enjoyed the lines, which were absurdly stable for being on ships on the high seas. This map had a little lag for some reason, but I managed to finish the mission fine. I carried a light machine gun into the battle, and it served me well. But I wasn’t particularly quick on the draw. Some parts were slow, but it never took me longer than 30 seconds to get into the action.

I also played a round of Domination on the Miami map, where you can admire the neon hotels that are reminiscent of Miami Vice. The lights, skies, pools, and reflections on this nighttime map are beautiful. While it’s dark, the many lights make it feel like you are fighting during the daytime. The many paths and corridors on this map made it easy for me to get lost. It’s inspired by Miami’s famous Ocean Drive, and you can either flank, find high ground to snipe from, or run right down the street.

I enjoyed playing in Angola on a desert map, where a satellite has crashed and your team has to secure it. The satellite is surrounded by caves and rock formations. You can fire from above on those running through the spaces below, but you can also be flanked by enemies running in the sand.

The Moscow map is set near the train station in a downtown area. In the center is a plaza, but there are many different paths you can run through and an enemy can be lurking around every corner.

Instead of guarding flags with a circle, you guard a somewhat larger physical space that is outlined with lights on the ground. That means you aren’t as exposed in a little circle as you try to take the point. I ran into a friendly player and fired, and he replied, “Hey, watch your f****** fire.” You don’t have to worry about healing yourself with a health kit. You simply pull out of the action for a bit, and you’ll automatically heal.

During the VIP mission, I hopped on a snowmobile in Uzbekistan. I had a hard time figuring out how to fight in this match, either as the bodyguard or the escort. If you were on defense, you had to guard one of two extraction points where a helicopter would come and pick up the VIP. If you chose the wrong one, you were out of luck. But sometimes it was easy to defend, as you could position yourself on the roof of a building and look down on the extraction site. Anyway, that’s what an enemy did to me and my team got taken out by a single shooter. I tried to run someone over with a snowmobile but I got shot. 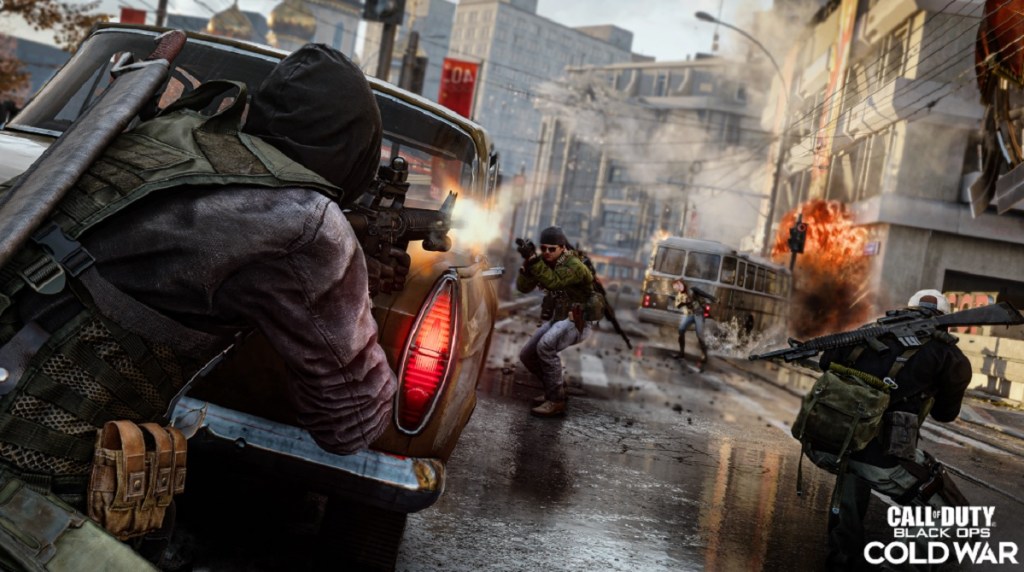 Information about the Zombies mode and how Cold War fits with Warzone will come later. But Warzone will evolve so that Cold War narrative and gear will be added, without making players start over in progression. After a year of playing Modern Warfare and months of Warzone, I enjoyed playing on some cleverly designed maps in fresh places. But it was still the same-old frenetic Call of Duty. And that’s good.

Mass Effect: Legendary Edition is still coming — but not this year

Having pets linked to better mental health during lockdown

Milagrow iMap 10.0 review: A robot that is smart about its cleaning

Having pets linked to better mental health during lockdown

Milagrow iMap 10.0 review: A robot that is smart about its cleaning